Blog - Latest News
You are here: Home1 / Exhibitions2 / A Century After: The Work of William M. Davis 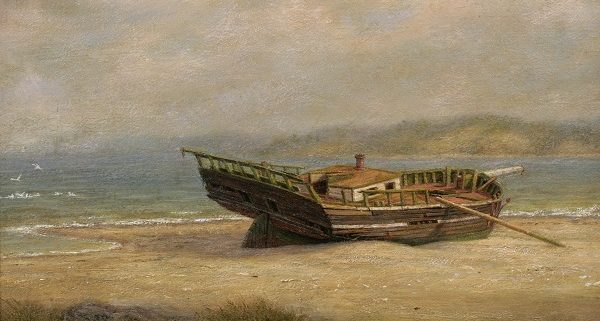 It has been a century since the death of artist William M. Davis. Born in Setauket in 1829, Davis was a sailor and apprentice shipbuilder before achieving recognition in his thirties as a talented painter. The 1860s marked his public debut in New York, where he exhibited politically-themed genre paintings to wide acclaim at the National Academy of Design and Brooklyn Art Association. The decade also marked the start of a friendship between the young artist and William Sidney Mount. In the years before Mount’s death in 1868 the men corresponded and visited each other’s studios. After a decade in the city, ill health spurred Davis’s semi-retirement to Long Island, where he resided in Mt. Sinai and maintained an art supply store and studio in Port Jefferson. Davis quietly sketched and painted into the 1910s, focusing on the waterfront and nearby ships and buildings. On this centennial of Davis’s passing, this exhibition offers one of the largest surveys of his art in half a century and a chance to reappraise his legacy.

Off the Rack: Building and Preserving LIM’s Art Treasures