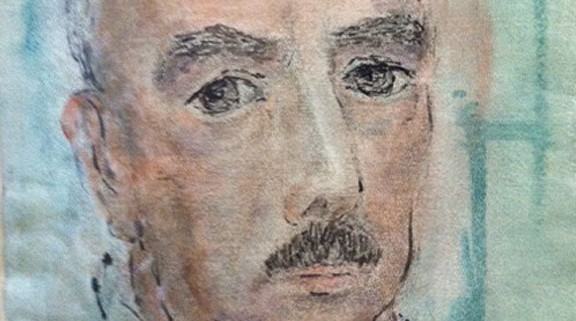 How do you define an artist who defies classification? An artist whose vast work product cannot be pigeonholed into one specific period or style? An artist whose approach to art responded to the ebb and flow of six decades of change?

George Constant worked in all mediums throughout his 60-year career and excelled in painting, watercolor and etching. Always vibrant and expressive, his art is at times experimental and other times staid. Yet at all times Constant was an artist whose primary goal was to explore man’s relationship with his natural surroundings. His thematic approach remained the same; his uniqueness lay in his style and technique.

Born George Constantinopoulos in Arahova, Greece, in 1892, the future artist lost both parents at the age of four, and afterward was sent to live with his uncle, the abbot of the Eleusa Monastery in Aegion, Greece. Here, the young George was drawn to the stern eyes of Byzantine icons. Enamored by the rich colors and bold lines of the figures in them, he later incorporated their compositional elements into his artwork.

At age 18 Constant came to the United States, having resolved to become an artist. He first went to St. Louis, where he enrolled in the School of Fine Arts at Washington University. Then two years later, in 1914, he was given a scholarship to attend the Art Institute of Chicago, where he studied with renowned artists and teachers George Bellows and Charles Hawthorne. Later he transferred to the Dayton Art Institute to complete his studies

In 1922, Constant moved with his family to New York where he divided his time between Manhattan and houses in the country, first in Connecticut and later Southampton, Long Island. In the latter part of his life, until his death in 1978, his Southampton studio became his chief workplace.

In New York City, Constant was overwhelmed by the vast urban landscape and the people who traveled in his artistic circles. He had his first one-man show in 1927 and maintained relationships with Manhattan galleries for the next fifty years. The work he exhibited early in his career consisted primarily of abstracted figures that showed his admiration for Paul Cézanne and pre-Columbian art. Later his work evolved into complete abstraction of figures and landscapes.

In contrast, Constant’s work on Long Island is largely representative of his love of the outdoors. He was an avid gardener, and outside Manhattan it was easier to see the fine details in the flowers and the trees. Nothing escaped his observing eye; his daughter, Georgette, remembers, “ Whenever we walked through a meadow together, my father was the first to spot a wildflower in the tall grasses, no matter how tiny its petals. New England aster, fleabane, tansy and ironweed all went into his palette.”

Constant’s love of nature was not exclusive to terra firma; during the late 1940s he began a nearly thirty-year obsession with the sky and outer space. Sunsets and sunrises, fragmented light patterns seen in the sky, and even spacemen began to take up residence on his canvas.

As a complement to the Long Island Museum exhibition, a selection of etchings by George Constant has been chosen to accompany his paintings. During the early years of the Depression he was commissioned by the WPA to complete a series of drypoint etchings for commercial reproduction, in which he explored a variety of themes, from urban landscapes to seaside scenes, from children at play to figure studies and still lifes. During the 1930s he undertook a large series of portraits executed in drypoint etching of American artists, writers and musicians, among them artists John Sloan and William Zorach and the pianist Sergé Kagan.

Constant’s Greek heritage and the early influence of Byzantine icons is best seen in a series of etchings he did of his daughter. Young Georgette is depicted wide-eyed with strong features and bold facial expressions, much in the way her Greek ancestors had depicted religious figures in icons and statuary. Constant successfully combined those strong compositional elements with the genuine love and affection he felt for his family, bringing a sense of humanity and kindness to his work. Georgette remembers her father in these lighter family moments: “He was light and swift on his feet, and when he led the Greek dances he always managed an extra skip.”

George Constant’s art has been appreciated by thousands, and his list of accomplishments is long. He is represented in the collections of more than 35 museums throughout the United States – including more than 500 watercolors and etchings and two oil paintings owned by the Long Island Museum, gifts of David and Georgette Constant Preston.

Gilding the Coasts
Scroll to top