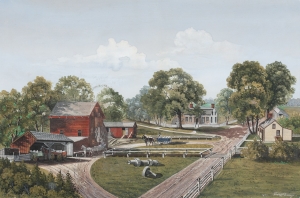 Curated by Jonathan Olly. Artist Edward Lange (1846–1912) emigrated with his family from Germany to New York in the 1860s. By 1870 the self-taught painter moved out to Elwood, Long Island, where he began to render the region’s towns, landscapes, and industries with precision and historical accuracy during the 1870s and 1880s. Until moving to Washington State in 1889, Lange produced many dozens – perhaps hundreds – of works of art on Long Island. This exhibition, spanning the five decades of his work from 1871 to 1912, will provide audiences with an unprecedented look at communities from New York City to Sag Harbor as they were transformed by growing populations, transportations, and new businesses and technologies. Most of the architecture, cultural landscapes, industries, and modes of transportation that Lange documented are now gone, but through his art we are offered a rare and exciting window back to a very different time. This project is a collaboration with Preservation Long Island, which is publishing a book about Lange in 2023.

Land by Hand: Edward Lange’s Long Island will be on view in the Art Museum, Main Gallery from September 22 until December 18, 2022.

Everything Is Possible
Scroll to top