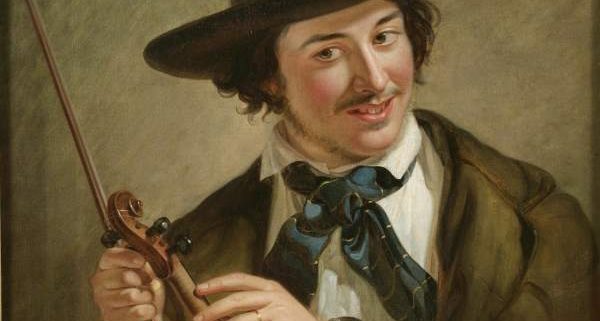 William Sidney Mount (1807-1868) formed an organic and everlasting bridge between his two chief passions in life: art and music. A new exhibition, Perfect Harmony, re-explores the confluence of Mount’s music and art through nearly 25 oil paintings, pencil drawings, and fascinating objects, such as a trompe l’oeil music stand that the artist carefully painted the sheet music of early American folk tunes on.  While this subject has been thoughtfully examined in other LIM exhibitions over the years, such as Catching the Tune (1984) and The Power of Music (2002), it has been many years since LIM has had a focused reinterpretation of the subject.

Mount came from a musically-oriented and gifted family. He was the nephew of Micah Hawkins (1777-1825), one of New York’s most gifted composers and the author of the first American musical comedic opera, The Saw Mill: or A Yankee Trick (1824).  In his immediate family, Mount described his father, Thomas Shepard Mount (1778-1814), as “passionately fond of Music,” while his brother Robert Nelson Mount (1806-1883) was a country fiddler and an itinerant dance master.  Undoubtedly, the artist was further influenced by the interracial music culture of both New York City and Long Island’s North Shore in his formative years.  By the 1820s, the soundscape of enslaved and free African Americans merged with and transformed the musical traditions of Scotch-Irish immigrants, creating a potently creative cocktail of new American music that stayed with Mount for life.

Many of Mount’s paintings and drawings concerned themselves with musical subject matter: his first self-portrait, an oil on panel done just after completing his schooling at the National Academy of Design, depicts a fresh-faced, confident 21-year-old man holding a light-hued wooden flute. Music takes center stage in a wide variety of the artist’s most famous works, including one of his earliest genre scenes, Rustic Dance After a Sleigh Ride (1830); Dancing on the Barn Floor (1831); The Dance of the Haymakers (1845); Right and Left (1850); The Banjo Player (1856); and a host of others.  The paintings and especially his pencil drawings evince a meticulous concern with proper musical positioning and posturing.  And beyond providing artistic muse, music gave Mount another serious outlet and passion that he pursued as a country fiddler, a fife player, a scribe and collector of folk songs, and the designer of a violin, which he called “The Cradle of Harmony.”

After many years of experimenting with the creation of a fiddle that could better project sound at the country dances he himself sometimes performed at, Mount was issued a patent for his “Cradle” on June 1, 1852. While it was never commercially successful, the artist’s hollow-back violin was displayed at the New York City Crystal Palace in 1853, where Mount actually demonstrated and performed on it.  Mount continued to experiment and carefully adapt his violin throughout the 1850s, even as his paintings continued to capture rich musical terrain.

Mount’s experiences anticipate a 21st century research landscape that has provided exciting new insights about neurological connections between all of the arts. Perfect Harmony will explore how Mount merged his twin consuming passions of music and art in an almost pre-modern sense, becoming, as his first biographer, Edward Buffet described him, “a rustic Leonardo.”

Perfect Harmony is on display in the Art Museum from February 16 through September 3, 2018.