This exhibition of nearly 50 paintings, screenprints, and collages explores the work of one of the 20th century’s most important visual artists. Born on September 2, 1911, in Charlotte, North Carolina, Romare Howard Bearden studied at Lincoln University, Boston University, Columbia University, and NYU, from which he graduated in 1935. After college, Bearden immediately joined the Harlem Artists Guild. Becoming a case-worker with the NYC Department of Social Services in 1938, Bearden’s career as an artist took rise in the 1940s, with exhibitions in Harlem and Washington, DC. He continued his arts education at the Sorbonne in Paris, in 1950. Committed to support of emerging black painters and to the cause of Civil Rights, Bearden founded the “Spiral Group” in 1962, with other Black artists Charles Alston, Norman Lewis, and others. Bearden’s work is in many significant museum collections around the United States, including the Metropolitan Museum of Art, the Whitney Museum of American Art, the Museum of Fine Arts, Boston, and The Studio Museum in Harlem. Awarded the National Medal of Arts in 1987, he died in New York City the next year, on March 12, 1988. The exhibition was organized by the Romare Bearden Foundation, New York. Exhibition tour management was handled by Landau Traveling Exhibitions, Los Angeles, CA. 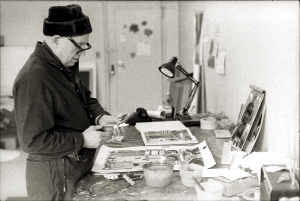 Bearden working in his studio, n.d.
Photograph by Frank Stewart
Courtesy of the Romare Bearden Foundation

Wish You Were Here