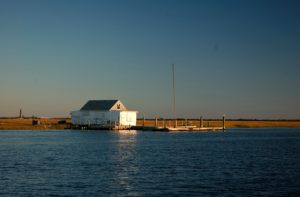 Chosen entirely from LIM’s art collection, Twin Peeks will present side-by-side views of nearly 60 paintings, from the 1830s to the present, placed beside photographs of the same or similar locations and buildings. Primarily drawn from Long Island or New York City artists and locations, this project has been an adventure in discovery and documentation for LIM’s Art Collection. Artists did not leave behind GPS coordinates, titles can leave vague and uneven clues, and the Museum has only recently attempted to more carefully track the locations of places represented in their collection.

Part of the power of landscape painting is its ability to capture and evoke a certain place that resonates with the viewer’s imagination and experience. Whether working out of a tradition of the Hudson River School, Impressionism, Photo Realism, or Abstraction, artists over the past 200 years have been the recorders of a specific moment and an interpretation of the locale they chose put to canvas or paper. Occasionally, their renderings may be the only tangible documentation that remains of a location that has vanished due to the forces of modernization: road construction, real estate development, and other human- and natural-born phenomena make the landscape mutable and difficult to capture the same way, even just twenty or thirty years later.

Off the Rack: Building and Preserving LIM’s Art Treasures

Atoms to Cosmos: The Story of Brookhaven National Laboratory
Scroll to top