Blog - Latest News
You are here: Home1 / Exhibitions2 / The Culper Spy Letter: A New Discovery at the Long Island Museum 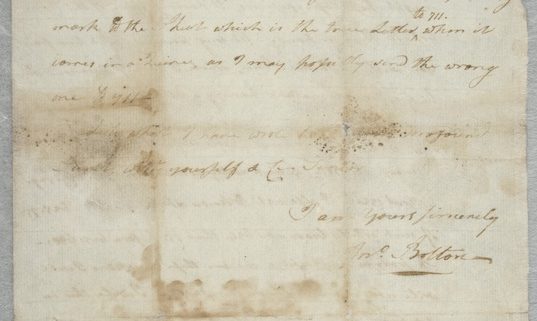 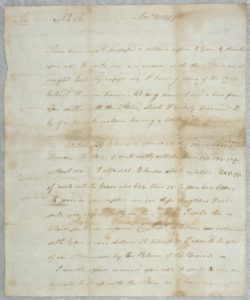 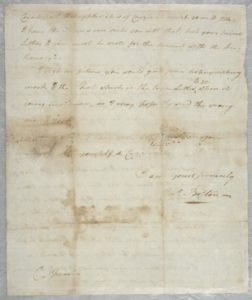 In August 2020 the Long Island Museum discovered an uncatalogued Culper Spy Ring letter in its collections. Acquired by the museum in December 1951, the handwritten double-sided letter measures 9 3/16” x 7 5/8”, is dated November 8, 1779, and is from Benjamin Tallmadge (using his alias, John Bolton) to Robert Townsend (alias, Samuel Culper Jr.).

The men were part of a spy network during the American Revolution which supplied George Washington with information on the activities of British troops then occupying the city of New York and Long Island. In the summer of 1778 George Washington tasked Major Benjamin Tallmadge with gathering military intelligence on the British headquartered in New York City. Born in 1754 on Long Island in the village of Setauket, Tallmadge recruited childhood friends and neighbors for his spy ring, including Caleb Brewster, Abraham Woodhull, and Austin Roe. In the ring’s most frequent movements, intelligence gathered in New York City would be sent by written message via courier to Setauket, then across Long Island Sound to Connecticut, and on to Washington’s headquarters. Reply messages would return by the same route.

Tallmadge took additional actions to maintain secrecy. The spies were assigned pseudonyms, with the network named after the ones for Abraham Woodhull (Samuel Culper Sr.) and Robert Townsend (Samuel Culper Jr.). Tallmadge created a numerical code book of 763 numbers that substituted for words. “George Washington,” for instance, was 711, “New York” was 634, and “doctor” was 126. Individual letters and numbers could also be swapped for other letters, with a word such as “silk” being disguised as “umco.” Lastly, correspondence could eventually also be written in invisible ink.

Despite the constant threat of being uncovered and several near misses, the spy ring operated successfully for five years, with no agents’ identities revealed or correspondence intercepted. One important example of the intelligence it provided Washington was when British General Clinton in July 1780 planned to send a force from New York City to attack French forces that had just arrived in Newport, Rhode Island. Once a Culper message and other intelligence reached Washington, he pretended to send troops to attack New York City, thereby forcing Clinton to cancel the plan and remain in the city to defend it.

Upon this letter’s August 2020 discovery, it was shared with Beverly Tyler, Historian at the Three Village Historical Society (which has documented and commemorated the spy ring through scholarship, an exhibition, and an annual Culper Spy Day); Kristen Nyitray, Director of Special Collections and University Archives at Stony Brook University (which owns two Culper letters authored by George Washington); Claire Bellerjeau, Director of Education at the Raynham Hall Museum (the former home of Culper Spy Robert Townsend, and home to Townsend family archives); and Bill Bleyer, freelance journalist, author, and retired Newsday reporter (who has a new book on the Culper Spy Ring). With an initial transcription and analysis by Bellerjeau and Nyitray, the group discussed how the letter fit with other surviving Culper correspondence and compared the handwriting.

Tallmadge wrote this letter to Robert Townsend on November 8, 1779, from Bedford, New York, where his Second Regiment of Continental Light Dragoons was based. A “No. 16” in the letter’s top left corner labels it as the sixteenth letter between the two men. Robert Townsend had joined the spy ring by the summer of 1779, and sent his first report to Washington that June. His position as a merchant importing goods into Manhattan allowed his to visit coffee houses, shops, and the waterfront without attracting suspicion. Townsend listened and observed the British, collecting information on fortifications, military plans, and the numbers, health, and movement of troops. Townsend (as Samuel Culper Junior) typically sent his letters via courier to Abraham Woodhull (as Samuel Culper Senior) in Setauket, who handed them to Caleb Brewster for transport across Long Island Sound.

In this coded letter, Tallmadge (as John Bolton) asks that Townsend refrain from using invisible ink for private conversations between them that do not need to go onto George Washington, as Tallmadge currently doesn’t have any of the “counterpart to decipher it”. Tallmadge says instead to use their numerical codes for future personal correspondence. Tallmadge also asks whether Townsend can transport “silks, gauzes, and such costly articles from New York to Setauket without danger,” and how the war has affected their values.

Tallmadge ends the letter with a request that “you would give some distinguishing mark to the Sheet which is the true Letter to Washington when it comes in a Quire, as I may send the wrong one to Washington.” A “quire” is a unit of paper quantity, of about twenty-five pages in modern usage. This detail reveals Townsend’s practice of writing letters to Washington using invisible ink and inserting the page into a new pack of paper (among the merchandise he sold at his Manhattan business), which he then provided to one of the spy ring’s couriers to take to Woodhull in Setauket.

The largest significance of this document is that it is the only surviving Culper Spy Ring letter from Benjamin Tallmadge to Robert Townsend. Abraham Woodhull was supposed to deliver it to Townsend, but subsequent Culper letters reveal that the intended November 10 meeting between the two did not take place. Undelivered and unread, it was nonetheless saved. Although it’s a private letter between two spies instead of conveying important intelligence up the chain of command, it’s noteworthy for mentioning the challenges of using invisible ink, showing how Townsend submitted his reports, and uses the Culper code (the “Dictionary”) to make it incomprehensible to outsiders.

After its discovery, the Long Island Museum decided to ensure the letter’s authenticity. To that end, the letter was inspected in November 2020 by Peter Klarnet, Senior Specialist in Americana in the Books and Manuscripts Department of the New York office of Christie’s. He concluded that based on the handwriting and paper that the letter is indeed genuine.

Both sides of the letter had been “silked,” an early 20th century preservation practice by which a fine silk mesh is applied to old paper to give extra support. The silk naturally degrades over time, however, voiding its effectiveness; in addition, it decreases the document’s legibility. In December 2020 the Long Island Museum sent the letter to Reba Fishman Snyder, paper conservator at the Morgan Library, in New York, to remove the silking. The process ensured the long-term preservation of the letter, as well as improved its readability.

In September 2021 the Long Island Museum will display the letter to the public, as part of Culper Spy Day (September 18) events in the Three Village area.

A transcription of the letter:

Some time ago I proposed a certain affair to you, & directed
you not to write me an answer with the Stain, as it
might possibly expose us, I having none of the Coun-
terpart then on hand. Not long since I rec’d a line from
you written with the Stain, which I luckily discovered to
be of a private nature, having a little of the counterpart
on hand.
What I wish to know of you is whether 707 [you] can 640 [transport]. 1 [a] few
Umcou [silks], Aewtiu [gauzes], 5 [and] such costly articles from 727 [New York]. 634 [to]. 729 [Setauket]
without 132 [danger]. I also wish to know what relation 625 [the]. 75 [cost].
of such articles bears now 634 [to]. their 75 [cost] before 625 [the]. 680 [war].
As soon as you resolve me in these Questions I will
write you more fully on the Subject. I write this in
plain Style as I am informed C–– Sen’r is to have an interview
with you & can deliver it himself. I should be glad
of an answer by the Return of the Bearer.
I must again remind you not to write to me on
private business with the Stain, as I have none of the

Counterpart to decipher it & of course it must go on to 711 [Washington].
I have the Stain & can write you with that, but your private
Letters to me must be wrote for the present with the Dic-
tionary.
I wish in future you would give some distinguishing
mark to the Sheet which is the true Letter to 711 [Washington].when it
comes in a Quire, as I may possibly send the wrong
one to 711 [Washington].
Let what I have wrote here be a profound
Secret with yourself & C – Senior.

I am yours sincerely
Jno. Bolton

Tiffany Glass: Painting with Color and Light
Scroll to top